Cheshire recycling innovator Big Atom has processed its one millionth tyre in just three years in its first step towards a fully sustainable operation.

Company founder, Alexander Guslisty, views this milestone as just the tip of the iceberg, with the Ellesmere Port-based site licenced to process 2.5 million tyres a year after new machinery was invested in to enable higher production levels.

Big Atom’s workforce has increased to 33 and a recent investment in upgraded machinery has allowed the company to produce rubber crumb in three size variants: 0-2mm, 2-6mm and 20mm.

Once collecting worn tyres from garages across the North West and North Wales, they are shredded and fed to a granulation line where the rubber is downsized and steel separated.

Approximately 50% of its recycled products is rubber for equestrian arenas and the construction industry, 20% is recovered steel and the rest of the rubber is further processed to go into surfacing in places like school playgrounds.

Alex said: “We have achieved a lot and the 1,000,000th tyre is a nice milestone, but we see this as the start and there’s still a lot of work to be done.

“Road construction is an area of potential growth and trials have taken place involving Highways England using rubber in road construction. This has been shown to reduce energy lost to sound and actually push vehicles along, making cars more energy efficient.”

Alex has established a footprint for Big Atom as the North West’s second largest tyre recycling plant, accounting for 12% of the region’s market share.

But he is thinking even bigger.

His ultimate aim is to bring an end to waste entirely by creating a circular economy for polymer materials.

Plans are already in place to build a patented chemical reactor and testing laboratory to create an even more sustainable regeneration process for polymers, which will be regenerated into new raw materials, such as oil, gas and carbon black.

Alex added: “The best solutions in the world are always the simplest. We are here because we can make the recycling process so much simpler. We care passionately about the environment, but we also love solving problems and removing convoluted processes.

“There is a problem with waste travelling thousands of miles on ships which we don’t have control over. We believe that we can solve this problem through our processes.”

The term ‘circular economy’ is one that is regularly referenced by Alex, who is pledging to create a process where polymer waste is regenerated into fully sustainable products, with the same quality as from fossil derived materials.

“If polymers come from crude, then they can be turned back to crude again at a later stage. In fact, this should be happening now,” said Alex. “Only 14% of consumer products are recycled at the end of their use, precisely because recycling methods are not fit for purpose. 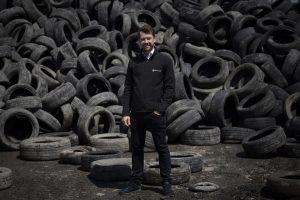 “We’re realistic about the world we’re living in. We’re not environmental purists who shout about the need to be greener, but we are aware of the huge inefficiencies in our recycling processes and we’re working to do something about this.”

He said cars can go electric but there will still be need for a sustainable solution for tyre waste. Clothing is not single use and it is often made from plastics, so there is a need to recycle those items, too.

“It’s predicted that plastic waste in the ocean will outweigh fish by 2050. There will be up to 850 million tonnes of plastic in the ocean by then. We want Big Atom to find pragmatic solutions by creating a circular economy for polymer materials.”

“Recycling our 1,000,000th tyre is a positive step, but it’s the first on a longer journey we’re on, with plenty more milestones to come.”