Investors are braced for a green bond rush this year, as policymakers seek a sustainable recovery from the coronavirus crisis.

Governments and companies are expected to issue $500bn in green debt in 2021, nearly half the total that has been raised since the asset class’s inception, according to a projection from Swedish bank SEB. In the first 11 months of 2020, global borrowers sold $270bn of the debt.

While green bonds still represent a sliver of the overall debt market, they are an increasingly popular tool for companies to fund operations that are more environmentally friendly. Christopher Flensborg, head of climate and sustainable finance at SEB, said the asset class is also important for the finance industry — often targeted by activists — by dragging banks into the climate fight.

“You’re basically empowering the finance sector to start competing on the climate change issue,” he said. “And if that is not an impact, I don’t know what it is.”

After market growth cooled in 2020, analysts forecast renewed momentum this year, encouraged by the political agenda. The EU has said it will launch €225bn worth of green bonds as part of the €750bn borrowing that will fund its Covid-19 recovery plan. SEB’s projection is based on an expectation that about a third of that total will hit the market next year. 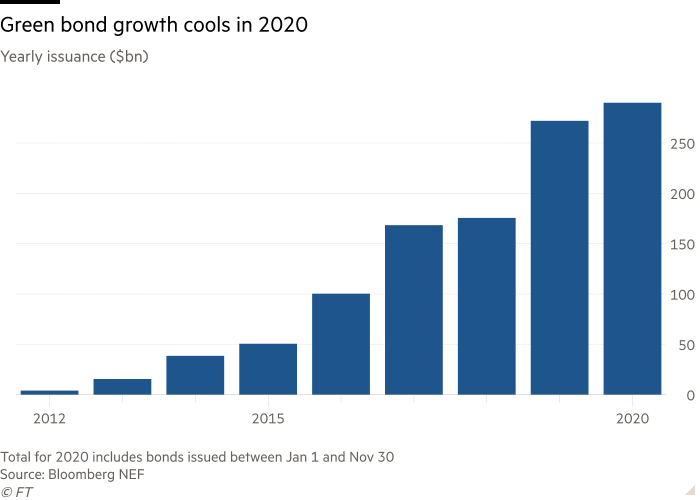 Other banks are not as bullish on Brussels, but they still have high expectations for the overall market. HSBC’s analysts are sceptical that the EU will make an immediate splash, especially given the fact that the bloc’s own green bond standards will not be finalised until the end of the year. “The EU can issue bonds up to 2026 . . . They don’t have to front-load it into next year,” said Dominic Kini, European credit strategist at HSBC.

And green debt does have an emerging rival in sustainability-linked bonds. The latter first emerged in 2019, reaching $9bn of annual issuance the following year, according to research provider BloombergNEF.

Unlike green bonds, which are used to fund specific climate-related projects, there are no restrictions on how an issuer uses the money they raise from sustainability-linked bond, so reducing the risk an issuer will be seen as “greenwashing” their borrowing. Instead, these bonds are designed to reward or penalise borrowers for hitting or missing their environmental goals. 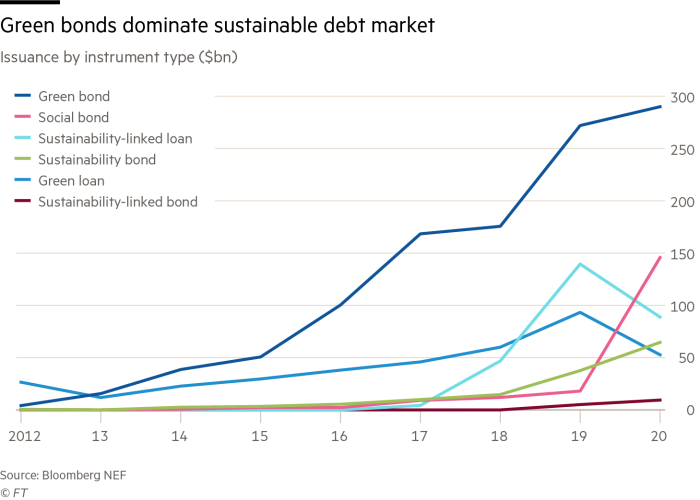 Even with these caveats, HSBC is still anticipating total green bond issuance to reach somewhere between $310bn and $360bn in 2021. Mr Kini is especially optimistic about growth in the US, expecting Joe Biden’s presidency to provide a tailwind to the sector following a Trump administration that has been hostile to environmental, social and governance investing.

Mr. Biden has promised to rejoin the Paris climate accord, and to get the US to carbon neutrality by 2050. He has also picked Brian Deese, head of sustainable investing at BlackRock, to lead the National Economic Council, and created a position on the National Security Council for a climate tsar.

Any extra supply would be quickly gobbled up, analysts said. They identify a shortage of green bonds in the US that is creating a “greenium”, where investors are being forced to pay more for green debt, reflected in lower borrowing costs for issuers. The US market needs to add $326bn worth of new green bonds to catch up to where Europe is today, HSBC estimates.

In theory, green and traditional bonds from the same issuer with the same maturity and coupon should have the same yield, as they hold equal credit risk. But that is not always proving the case. “They don’t have the same yield because green bond investors specifically want to buy green bonds and so that creates demand . . . and all else being equal, that makes the green bond slightly more expensive [for investors],” Mr Kini said.

But the existence of this “greenium” is still up for debate.

“It would be way too simplistic to contend there is a single, measurable greenium,” said Bertrand Rocher, portfolio manager at Mirova, a boutique investment firm affiliated to Natixis Investment Managers. Although he added that such a premium was quite likely in those sectors where only a few green bonds exist.

Companies do not tend to issue green bonds and traditional bonds with the same terms at the same time, so it is hard to make a clear-cut comparison. The Climate Bond Initiative analysed 46 green bonds issued in the first half of 2020 and was able to create a yield curve for only 21 of them. Of that sample, only five showed evidence of a greenium, pricing inside the yield curve.

The green bond market’s growth has coincided with a period of easy monetary policy, reflected in rock-bottom interest rates and reduced credit risk. That has not been an ideal scenario to produce greeniums, said Mike Ferguson, S&P Global Ratings’ director of sustainable finance.

“I think it’s fair to say that credit quality could certainly weaken,” he added. “And if that’s the case, I think that there probably is a bit of room to see more pronounced greeniums over time.”